Shopping Cart
Your Cart is Empty
Quantity:
Subtotal
Taxes
Shipping
Total
There was an error with PayPalClick here to try again

Thank you for your business!You should be receiving an order confirmation from Paypal shortly.Exit Shopping Cart

OLEAN, NY, April 18, 2019—Enchanted Mountain Roller Derby’s flagship team, the Hellbilly Heartbreakers, are looking forward to their 9th season of competitive play in 2019, with home games to be played in Olean starting on May 18th.

According to team captain Dali D (Kathy Prozeller of Portville, NY), “the charter team's roster is composed of mainly returning veterans with a few fresh meat (new skaters) added in to replace a few non-returning skaters. There are still a few spaces available on the charter that our training pool skaters are competing to fill.”

The Hellbillies will be playing 9 games this season, 6 of which are sanctioned games. The results of sanctioned games will be used to rank EMRD internationally with the Women’s Flat Track Derby Association (WFTDA). EMRD became a full member league of WFTDA in 2017, and only began participating in sanctioned games in 2018. At the beginning of 2019 they were ranked 316th in the world. “The athletes of EMRD have worked extremely hard to lock in strategic gameplay on the track this season,” said Co-Captain Alabama SlamHer. “We are a unit and you can expect that to be displayed on the track this year. It’s going to be our most exciting season yet!”

Home games will take place on May 18 vs WestCo (PA) Derby, June 8 vs Jerzey Derby Brigade (sanctioned), June 22 vs Ithaca BlueStockings, July 13 vs Two Rivers (PA) Roller Derby (sanctioned) and Aug 17 vs Ohio Valley Roller Derby (sanctioned). All home games are played at the William O. Smith Recreation Center in Olean, with doors opening at 6:30 pm and first whistle at 7:30. Tickets are $8 in advance or $10 at the door, with free admission for kids 10 and under. Pre-sale tickets can be purchased online through the EMRD website or from any derby girl.

As in past years, 10% of ticket sales for each home game will be donated to a local charity. Proceeds from the home opener on May 18 will be donated to the SPCA in Cattaraugus County in memory of EMRD Junior Heartbreakers skater Sarah Masip Scott, AKA Silent but Violent. Scott passed away in March, and the team wanted to do something special to honor her. “Her quiet personality was often seen as shy, but we will fondly remember Silent as a sweet, smart, cheerful girl who loved derby and loved her teammates,” said Guillotina (Tina Jasperson of Olean, NY), one of the former coaches of the now defunct Junior Heartbreakers team

Other charities to be supported this season include Intandem and Directions in Independent Living in Olean, Empire Area Rescue Society in Salamanca, and Narcolepsy Network. “It’s really important to us that we are empowering women while also giving back to our community,” said Kimchi Killa, one of the league’s board members. “This league provides an environment of love, acceptance, and empowerment for every single one of its members. I can’t tell you how many of my derby sisters I’ve watched face some of their worst fears and self-doubt and with each practice embrace a more positive outlook and self-image, myself included.”

The Hellbilly Heartbreakers will also travel four times this season. On April 6 they played the Suburbia Roller Derby in Yonkers, NY for another sanctioned game, with the Hellbillies losing 198-124. “We didn’t win the game,” said another board member, Bloody Professor, “but the Yonkers trip was a great start to the season for us. #105 Gotti Glockzz got to play in her first game, 12 rostered skaters made the trip, and we were supported in Yonkers by a huge group of support staff, including 1 referee, five NSOs (Non-Skating Officials), two bench coaches, a photographer, a merchandise seller, and two fans. It was a great bonding experience and I think it’ll pay off when we go to Maryland at the end of the month.” On April 27 the Hellbillies will take on Salisbury Roller Girls in Salisbury, MD in another sanctioned game. On May 11 they will play the Roc City B-Sides in Rochester, NY, and on July 28 they will play Harrisburg Area Roller Derby in Enola, PA in yet another sanctioned game.

In addition to competitive skaters, EMRD also has a growing group of referees and NSOs. Returning this year is Head Referee Lynsanity (Lynette Case of Portville, NY), Head NSO Jenesis Exodus (Jennifer Henton of Portville, NY), and Referee Refelation (Tadd Grimes of Knapp Creek, NY). “We also have some new referees this year that are training to help ensure that all skaters remain safe throughout practices and games,” said Prozeller. The new referees include Maximum kIMPACT (Kim Galloway of Eldred, PA) and Lilo~n~Stitches (Elida Green of Olean, NY), both of whom are also members of the “Hellbabies” training pool and hope to join the Hellbilly roster next season.

Other training pool skaters include #17 Walking Dread (April Torrey of Lewis Run, PA), #1979 Sicillian StunHer (Christine Dupre Davis of Bradford, PA), #2 Atomic Warhammer (Angeline Ackerson of Shinglehouse, PA), #55 The Slayer (Bonnie Higby of Olean, NY), #724 ¼ Pint (Courtney Lentz of Olean, NY) and #808 Guillotina. When asked why she joined EMRD, Sicillian StunHer said “while it is true that it is stress relief, it is also about something I have wanted for a long time - an encouraging sisterhood. Each woman on the team has a unique background and is so incredibly strong in her own way - we can teach each other to be strong in body, mind and soul. We always cheer each other on - on the track and off.”

EMRD is always recruiting adult skaters, referees, coaching staff, and volunteers. Interested individuals can drop by any practice at the old Limestone School, 640 Main St, Limestone NY. Practices are held Sunday afternoons from 3-5 and Tuesday and Thursday evenings from 7:30-9:30. More information is available at www.enchantedmountainrollerderby.com or on the league Facebook page. 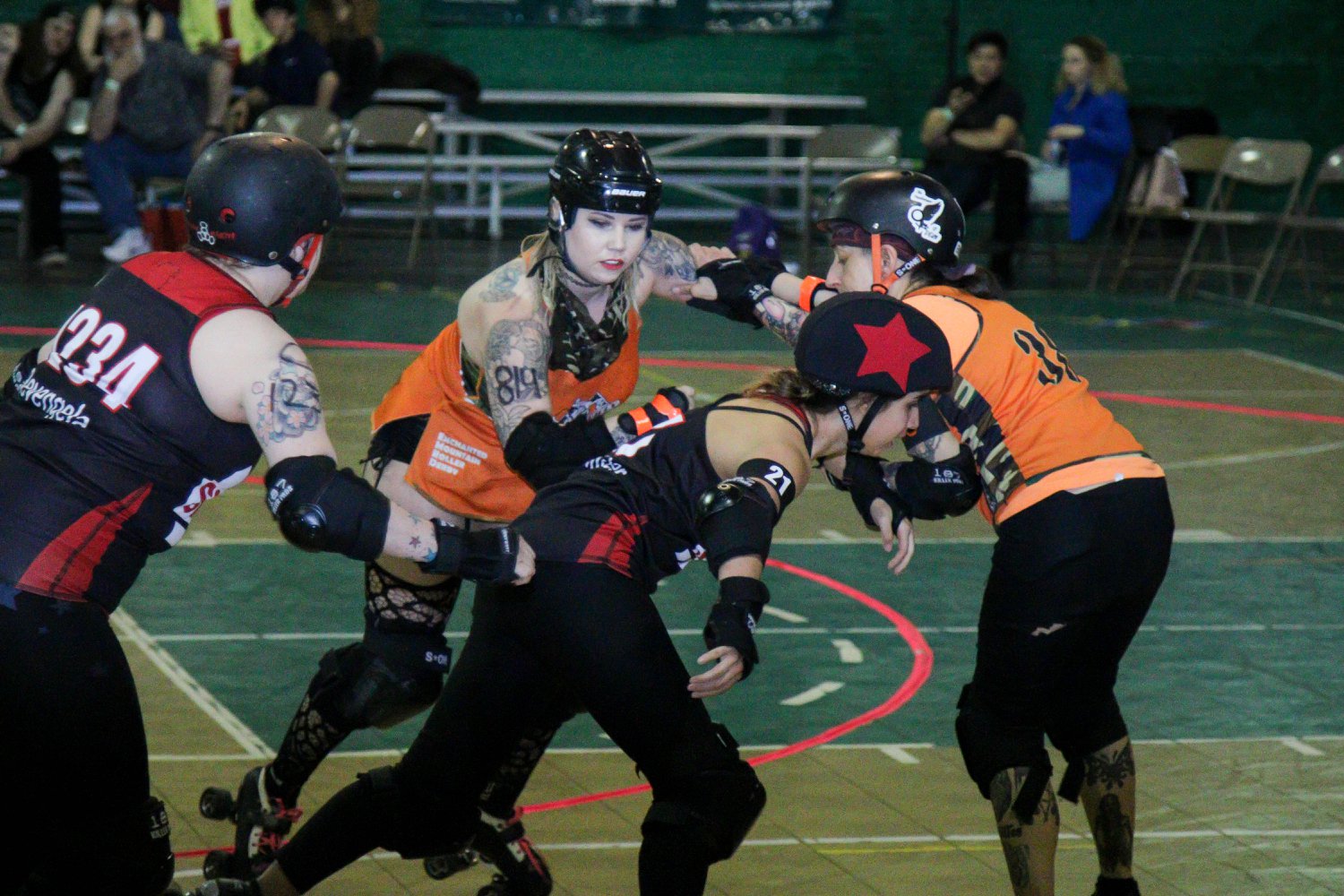 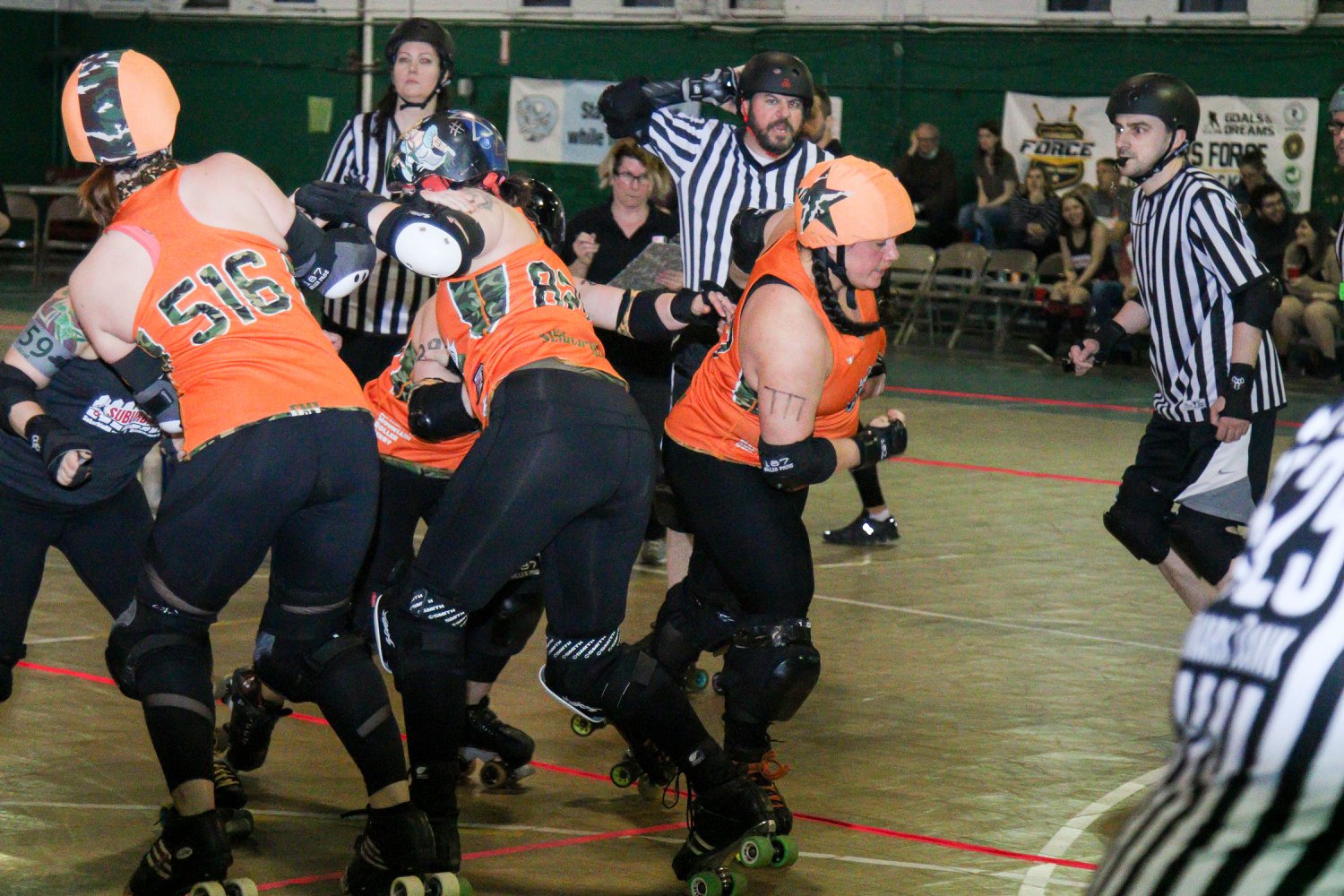 About the league: Founded in 2010, Enchanted Mountain Roller Derby (EMRD) is a women's flat-track roller derby league located in the Southern Tier of Western New York and is owned and operated by skaters. Our mission is to make a positive difference in the lives of women. We believe in the value of the individual, the strength of the team, and the power of the female spirit. We are committed to redefining the classic sport of roller derby, while giving it relevance in the 21st century. Flat-track roller derby is a full contact sport played by independent, strong women. We will remain an organization for women, with powerful ties to our community and each other. We will support our community through charitable giving, volunteerism and awareness, all the while, participating in community events to continue visibility for our league and our sponsors.